We are looking for additional teams to play in the league. Please view the league website mhscl.lktechnodude.com for detailed information on the league.
League’s major events during the 2013-14 season are below (Details to be announced in the future).


The tournaments and most of the matches are played at Cornwall Central High School.


If your school is considering or interested in joining the league, please email Larry King at LDKing1313@yahoo.com


We hope you school considers or decides to join the league! 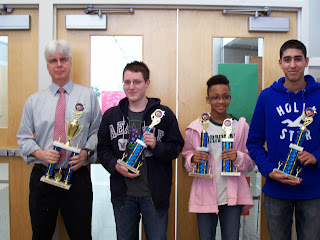 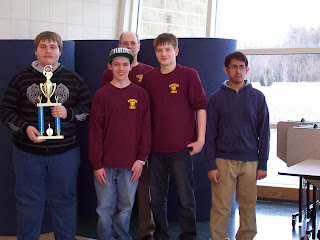 Five round five matches and one make-up match were played on February 23 at Cornwall High School. Several matches determined which three of the five playoff-contending teams would participate in post-season play on March 2.

The Mount Academy Team Two snapped James O’Neill Team One’s eleven-regular-season-match winning streak. The last time O’Neill One lost a match was against Monroe-Woodbury, 6-3, in Round 3 during the 2010-11 season.


Middletown HS, despite having only two players, defeated Monroe-Wooodbury, 5-4, in Round five, and James O"Neill HS Team Two, 6-3, in a makeup match. Kyle Pacia and Tim Haines scored 5.5 points apiece in the two matches for Middletown.

The league will hold its playoffs and End-of-Season Swiss tournament March 2, 2013, at Cornwall Central HS. The Swiss event will have players not participating in the playoffs.

Kingston will not clinch a playoff spot for the first time in eleven years. The school did not participate in the playoffs twice because of prior commitments. Third-place John S Burke High School, which replaced Kingston HS in the 2007-08 playoffs, took advantage of the opportunity and won the league championship.

Below is the round five pairings involving the playoff-contending teams.

Here are some the playoff scenarios.

The Mount Academy Team Two makes the playoffs if one of the following occurs:

Cornwall Central HS Team One finishes first if one of the following occurs:

1, If Cornwall Central HS Team One wins and the Mount Academy Team Two draws or loses;

Cornwall Central HS Team One clinches a playoff spot if one of the following occurs:

1. If Monroe-Woodbury draws or loses;

Monroe-Woodbury clinches a playoff spot if one of the following occurs:

Please visit mhscl.lktechnodude.com for additional information on the league.
Posted by LKing at 5:13 PM No comments: