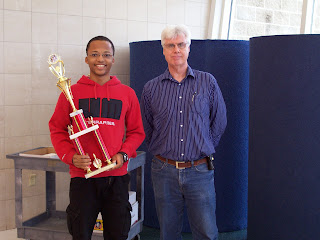 The event was a combination of an individual and team tournament. The top four scores of players from the same school were used to calculate a team point total each round.

Cornwall HS, with the hope of Alister Collins’ five points, won its fourth straight team trophy with 17 points. The Mount Academy, scoring three points in the fifth round, finished in second with 12 points. James O’Neill HS finished in third place with 11 points. 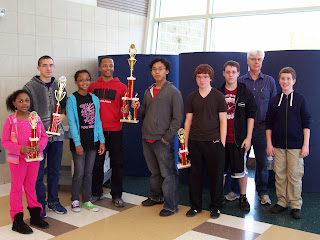 Please check .mhscl.lktechnodude.com for detailed information and photos of the MHSCL league.
Posted by LKing at 7:25 PM No comments:

The end-of-season five-round Swiss tournament was held at the same time as the playoffs. The event included players who did not participate in the playoffs. Kostya Shetakuri of Monroe-Woodbury HS won the 23-player section by a 5-0 score. Adrian Burnett, Leroy Meier, and Titus Decker, all The Mount Academy students, each scored four points. Other trophy winners were Shawn Burnett (The Amount Academy) and Ella Collins (Conrwall), each with three points.

Please go to mhscl.lktechnodude.com for detailed info on the 2011-12 season and the league.